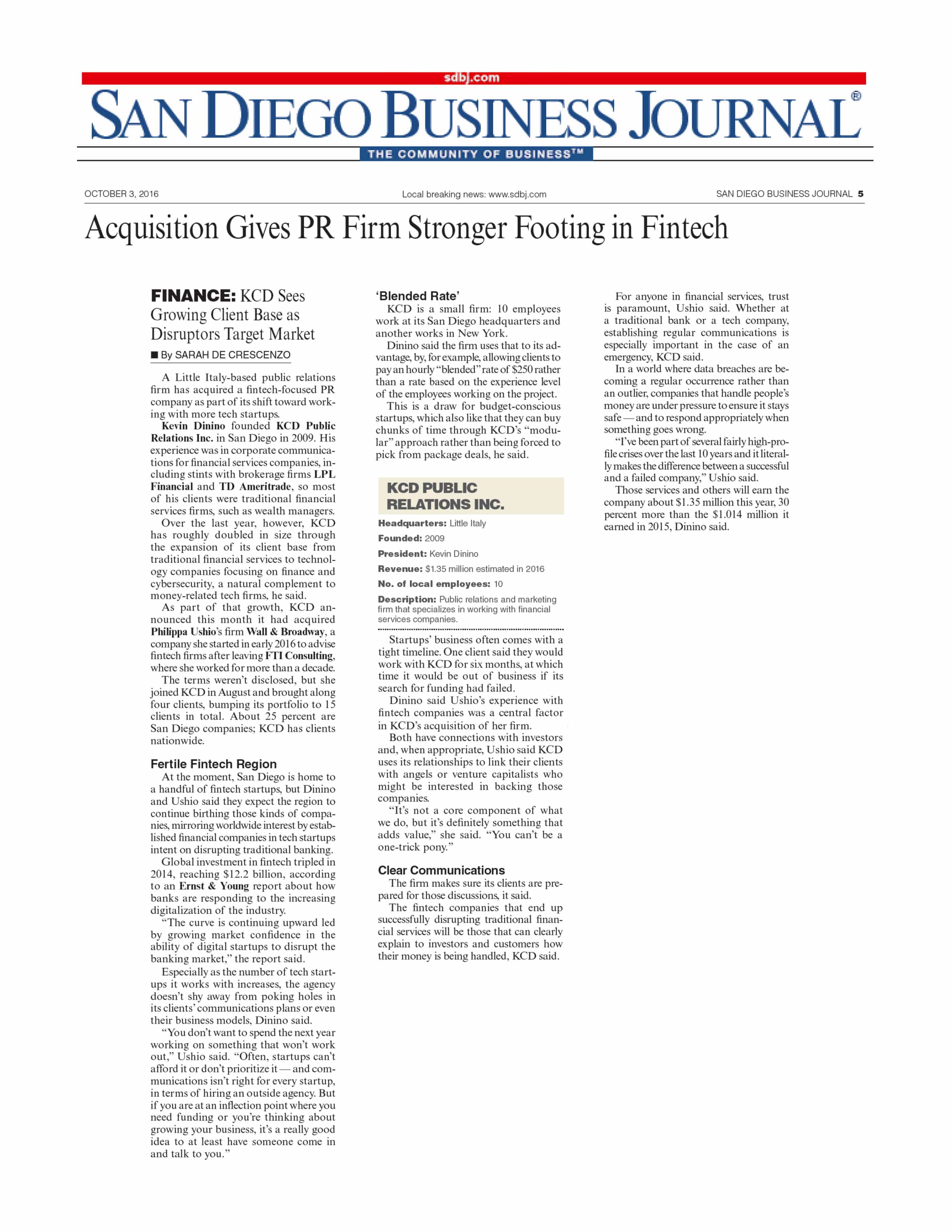 San Diego — A Little Italy-based public relations firm has acquired a fintech-focused PR company as part of its shift toward working with more tech startups.
Kevin Dinino founded KCD Public Relations Inc. in San Diego in 2009. His experience was in corporate communications for financial services companies, including stints with brokerage firms LPL Financial and TD Ameritrade, so most of his clients were traditional financial services firms, such as wealth managers.

Over the last year, however, KCD PR has roughly doubled in size through the expansion of its client base from traditional financial services to technology companies focusing on finance and cybersecurity, a natural complement to money-related tech firms, he said.

As part of that growth, KCD PR announced this month it had acquired Philippa Ushio’s firm Wall & Broadway, a company she started in early 2016 to advise fintech firms after leaving FTI Consulting, where she worked for more than a decade.

The terms weren’t disclosed, but she joined KCD PR in August and brought along four clients, bumping its portfolio to 15 clients in total. About 25 percent are San Diego companies; KCD PR has clients nationwide.

At the moment, San Diego is home to a handful of fintech startups, but Dinino and Ushio said they expect the region to continue birthing those kinds of companies, mirroring worldwide interest by established financial companies in tech startups intent on disrupting traditional banking.

Global investment in fintech tripled in 2014, reaching $12.2 billion, according to an Ernst & Young report about how banks are responding to the increasing digitalization of the industry.

“The curve is continuing upward led by growing market confidence in the ability of digital startups to disrupt the banking market,” the report said.

Especially as the number of tech startups it works with increases, the agency doesn’t shy away from poking holes in its clients’ communications plans or even their business models, Dinino said.

“You don’t want to spend the next year working on something that won’t work out,” Ushio said. “Often, startups can’t afford it or don’t prioritize it — and communications isn’t right for every startup, in terms of hiring an outside agency. But if you are at an inflection point where you need funding or you’re thinking about growing your business, it’s a really good idea to at least have someone come in and talk to you.”

KCD PR is a small firm: 10 employees work at its San Diego headquarters and another works in New York.

Dinino said the firm uses that to its advantage, by, for example, allowing clients to pay an hourly “blended” rate of $250 rather than a rate based on the experience level of the employees working on the project.

This is a draw for budget-conscious startups, which also like that they can buy chunks of time through KCD PR’s “modular” approach rather than being forced to pick from package deals, he said.

Startups’ business often comes with a tight timeline. One client said they would work with KCD PR for six months, at which time it would be out of business if its search for funding had failed.

Dinino said Ushio’s experience with fintech companies was a central factor in KCD PR’s acquisition of her firm.

Both have connections with investors and, when appropriate, Ushio said KCD PR uses its relationships to link their clients with angels or venture capitalists who might be interested in backing those companies.

“It’s not a core component of what we do, but it’s definitely something that adds value,” she said. “You can’t be a one-trick pony.”

The firm makes sure its clients are prepared for those discussions, it said.

The fintech companies that end up successfully disrupting traditional financial services will be those that can clearly explain to investors and customers how their money is being handled, KCD PR said.

For anyone in financial services, trust is paramount, Ushio said. Whether at a traditional bank or a tech company, establishing regular communications is especially important in the case of an emergency, KCD PR said.

In a world where data breaches are becoming a regular occurrence rather than an outlier, companies that handle people’s money are under pressure to ensure it stays safe — and to respond appropriately when something goes wrong.

“I’ve been part of several fairly high-profile crises over the last 10 years and it literally makes the difference between a successful and a failed company,” Ushio said.

Those services and others will earn the company about $1.35 million this year, 30 percent more than the $1.014 million it earned in 2015, Dinino said.