Social Media Gets SEC Stamp of Approval. What’s Next?

The SEC recently announced that publicly traded companies will be allowed to announce company news through social media pages, provided they have announced previously which sites they intend to use.  This means that you will likely start to see firms first disclose relevant company information on platforms such Facebook, LinkedIn, Twitter, Reddit or even Instagram – imagine a financial document with a nice rosy filter… 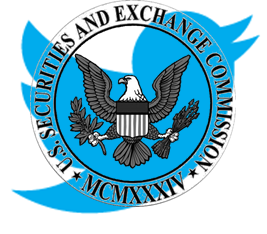 One of the first companies to wade into this pool has been Bloomberg, which announced that it has begun to integrate Twitter into its International Information Platform with filters and alerts to organize its Tweets by a wide range of categories, such as asset class, company, or market sector (“After SEC Decision, Bloomberg Integrates Tweets Into the Wire”). In the past, the procedure for a company announcement included filing with the SEC and then issuing a press release or holding a targeted event in an effort to secure media coverage. This shift will now allow companies to offer greater transparency to their shareholders and the media alike, while also providing a forum for the public to provide the company with immediate feedback regarding its business activities.

We believe the SEC’s ruling will revolutionize the way that public companies (with private companies following suit) communicate, as many of the barriers that have traditionally slowed down the flow of information have been removed. With these “old guard” techniques falling by the wayside, companies can now substantially reduce the chances of information slipping through the cracks before an “official announcement” is made, which is a common cause of insider trading and other questionable practices.

This week’s news will also have an effect on those who work in public relations and communications, especially those in the financial services industry. PR practitioners have generally employed the press release to achieve media results, but now with the ability to communicate using social media, the long-term muscle of the press release will begin to decrease and potentially become more of an “info-dump” than something with real value (who would’ve guessed a tweet might overtake a press release?).  While this is definitely not the swansong of the press release as a communications tool, its role as the dominant means of releasing company information is likely coming to an end.

With such huge implications on public announcements and the ensuing effect on share prices, the winners are going to be early adopters who integrate a mixture of financially significant information with targeted communication tactics that drive public opinion. As we all know, major shifts in public opinion can have a huge influence on market prices.

For wealth management firms wanting to capitalize on this shift, it’s important to understand that media relations are going to change. Interactions with the press will move even further online. Rather than waiting for a PR or marketing department to announce news with an official release during regular business hours, financial news can, and will, be breaking online first. Where online? The folks at Twitter likely just jumped for joy with this announcement. The validation of its service as a news distribution machine is huge in many ways. You can fully expect the business and financial media to continue to report via Twitter and seek out companies that have an active presence announcing news and trends via their Twitter platforms. If your firm is not using Twitter yet, it’s time to catch up.

The key takeaway for anyone wanting to capitalize on this new opportunity is to acknowledge that social media is finally being embraced by regulators. Company news being pushed out to reporters in real time means there will always be someone online looking for a story to write and it may as well be yours! So build out your Twitter profile, follow Bloomberg or any news sources/reporters that interest you, and start interacting; the more you put in, the more you get back!

(Note: Wealth management firms still should go through their firm’s compliance protocols in order to meet SEC/FINRA guidelines on what can be said on social media, which is different from public disclosures and was also recently loosened to allow better online interaction.  For more information on the two recent changes to social media regulations, click here: SEC: “Report of Investigation…” April 1, 2013 / SEC: “Filing Requirements for Certain Electronic Communications” March 18, 2013)